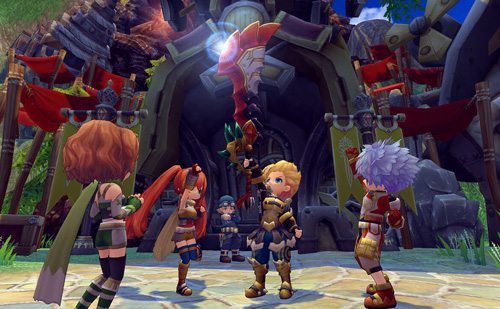 Aeria Games, the Publisher behind Dragomon Hunter has just released the class lineup for their new MMORPG. The classes will fall within four distinct categories: Scout, Mage, Cleric, and Mercenary. Dragomon hunter is a F2P anime-style MMORPG that pits players and their friends against fearsome beasts and mythical creatures. The game is scheduled to launch in North America and Europe this fall, however, specific dates have yet to be released.

The scout is a master of agility and strength. Using the dual-blade to crush through enemy beasts this class will be well suited for those that prefer melee combat.

The Mercenary is an absolute necessity to any successful hunting party. Despite that they do not possess the agility and fast attack speed of the scout, mercenaries are quick to defend other teammates with a barrage of range and melee attacks. This class comes equipped with heavy armor enabling the mercenary to withstand quite the thrashing before they are forced to back down. Players will also have the ability to jump to a selected tarted and perform a crippling strike to the enemy.

Mages are endowed with vast magical power to take down their foes. This class has the options to harness the power of Fire, Thunder, Frost, and many more to destroy the monsters in their path.

The Cleric is the healer class and an essential component of the group. This class will utilize a selection of several spells and incantations to buffer the defense, attack, and other traits of their fellow team members.