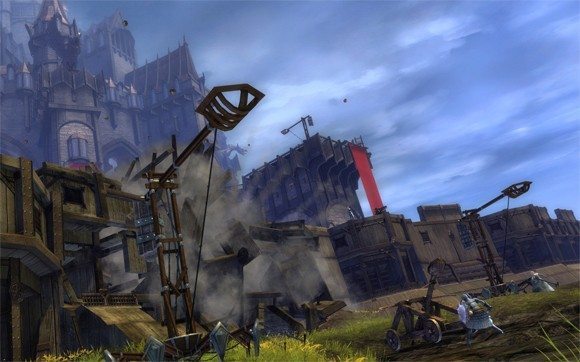 The second installment of Guild Wars is getting a new PvP game mode, entitled Stronghold. Arenanet has just announced the details of the mode, which is adding a lot of new features to the Guild Wars gameplay.

The map is called Champion’s Dusk, and it pits players against an enemy stronghold held by a lord. Once players infiltrate the base and kill the lord, they win. However, it’s not as simple as it seems. Stronghold has a lot of new features, including Guards and Trebuchets for defense, and Heroes and Supply for offense. Players can enlist NPCs for supply to help them assault the gates, or they can summon heroes to help finish off the Guards and breach the lines.

Game Runners John Corpening and Hugh Norfolk released a statement on February 11th, outlining all of the new mechanics that players can expect. They were all too eager to dive into the specifics, promising Stronghold to be an exciting, fast paced action MMORPG. “Whether you’re fighting over supply, pushing or defending a lane, getting your doorbreakers to your front line, or blasting your enemies to smithereens with a trebuchet, you’ll never find a time where you’re not actively engaged.”

For the full statement, please go to https://www.guildwars2.com/en/news/stronghold-the-battle-of-champions-dusk/