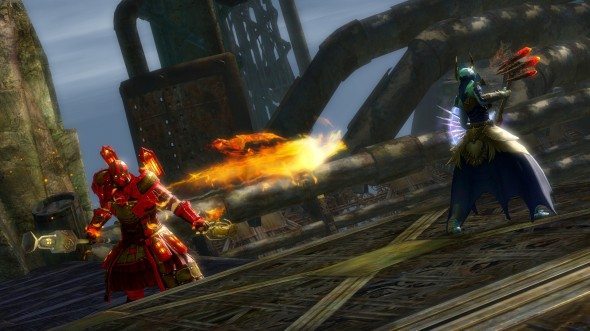 Guild Wars 2 laid out the blueprints for a player versus player feature for their MMO well over a year ago and now they have finally unveiled the finished project. According to a post by GuildWar’s John Corpening, published early this week, not only have they completed everything on their roadmap for this new feature but they have apparently added much more than was originally planned.

The new PVP League system will also feature an area where both beginners as well as vets will have the opportunity to view their progress, set goals, and receive rewards. Before, GuildWars 2 hosted regular competitive event for top PVP teams only but now a new system will be put into place which will allow everyone to compete and be rewarded. According to his post, Corpening lays out the basics of the PVP League feature in his introduction:

“In Guild Wars 2: Heart of Thorns™, PvP will have regular league seasons. During a season, players begin in the starter division and earn their way up to the next by defeating other players within their division, earning rewards and gaining prestigious items along the way. PvP leagues will give players of all skill levels regular goals, better matchmaking, and unique rewards, and they’ll provide a better system for ranked play in Guild Wars 2.”

League divisions will be categorized by six tiers ranging from division one- The Amber Division, which is where everyone will start out all the way up to the legendary division. This will provide a spot for all skill levels to spar up against similarly skilled players. Corpening explains the leveling up process in detail and touches on the rewards of leveling up divisions during his post:

“ Divisions are broken up into a variable number of tiers, and each tier has several pips. To rise a tier, you must earn pips. Winning a match guarantees you a pip, and in some cases you won’t need to win—you’ll simply need to beat a required score threshold if you’re matched against a team outside your skill bracket. To cross into the next division, you must complete all the tiers in your current division. For example, division one has three tiers with five pips each. When you win five matches, you move up to tier two. Gain five more, and you’re at tier three. Do it again, and you advance to division two. Crossing into a new tier for the first time in a season earns you rewards, and bigger rewards and prestigious items are awarded each time you make it into a more advanced division.”

If you would like to read more about some of the other specifics of the new PVP League system for GuildWars 2: Heart of Thorns check out the official page here.