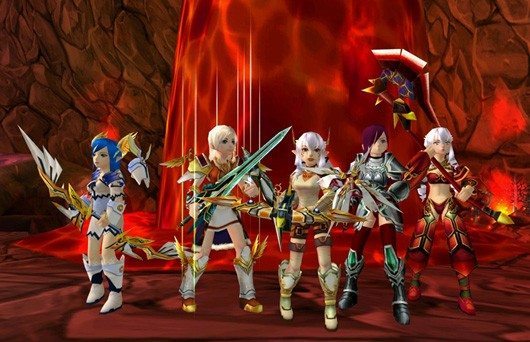 Fiesta Online has been mostly overlooked due to it existing in a massive (no pun intended) heap of other 3D fantasy MMORPG’s. Despite it possessing a unique, cell-shaded, anime-style presentation, the real question remains — is it worth your while? Well, let’s find out, shall we?

First up, let’s take a look at the basics.

Number of players: Above average

Worth Your Time: Yes

Although it’s more than many other 3D MMORPG’s, there are only five initial starting character classes. Each of these classes provide two job advancements — one at level 20 and another at level 60. We’ve provided a brief breakdown of each of these classes for you below.

As you might expect, Fighters are the main “warrior” class in Fiesta Online. They’re extremely adept at anything and everything melee combat and also (unsurprisingly) have the most hit points and heavy armor options in the game. They’re also quite proficient at your choice of either one-handed or two-handed weapon choices.

Also just as you might expect, Mages are Fiesta Online’s primary magic-dealing class. They can deservedly dish out great deals of magical damage from a distance but are also (understandably) extremely vulnerable in melee range. While they have a vast pool of mana points, they alternatively have very low hit points and very minimal defensive capabilities.

Whereas Mages are Fiesta Online’s primary offensive magical damage dealers, clerics on the other hand exist best when in a supportive or defensive magic format. They have a vast variety of various healing and buffing skills and, as such, are extremely valuable to any party. Although they’re the weakest class on paper, they are understandably extremely useful when used properly and correctly.

Archers are exceptionally fast and agile and are used best dealing significant damage from afar with their bows. Like the Mage, the Archer can dish out tons of ranged damage but are quite the liability when it comes to melee combat.

The Trickster is a dual-wielding class that can deal out insane amounts of damage in short bursts and — along with the Archer — make up what amounts to the Rogue class in Fiesta Online. Despite dealing best in trickery and stealth, the Trickster is primarily melee-oriented and possesses moderate levels of hit points.

As we’ve said before, Fiesta Online’s biggest asset — at least in differentiating it from the tons of other fantasy 3D MMORPG’s on the market today, are it’s cell-shaded, anime-esque graphics. It truly does set itself apart from the pack and while at first glance may appear as a bit too cutesy for older players, it certainly doesn’t feel as such with prolonged play.

If anything, developer Outspark has done an excellent job at crafting a beautiful, unique and — perhaps most importantly — believable world inside Fiesta Online. You’ll quickly become accustomed to the cell-shaded, anime-style graphics and if you’re anything like us, it’ll be a bit difficult (at least more than expected) to jump into whichever game you play after a prolonged session of Fiesta Online due to the affinity you’ll no doubt establish with the title.

While it may seem like a carbon copy 3D fantasy MMORPG outside of the graphics, Outspark has definitely succeeded in crafting their own little cell-shaded, anime-fueled niche in the overall market. If you’re a fan of the graphics after looking at a few screenshots and videos and enjoy 3D fantasy MMORPG’s yourself, then you no doubt owe it to yourself to — at the very least — give Fiesta Online a shot. You certainly won’t be sorry!