Fallout 4: The Old Skill System Has Received an Overhaul

Bethesda has released new information regarding the new leveling system to be featured in Fallout 4, and it appears that much has changed.  The new system tweaks multiple elements of the old Fallout 3 system with the goal to bring on a more streamlined experience. Undoubtedly, one of the more notable alterations that has been made is the apparent removal of all the old skills.  Additionally, there will only be two systems that players will have to worry about now: S.P.E.C.I.A.L. and perks. The S.P.E.C.I.A.L system will still form your characters primal stats aka: Strength, Endurance, Perception Charisma, Intelligence, Luck, and Agility. Perks will now be directly tied to stats and each stat will have its own mini perk tree.

For those of you out there who are not fans of drastic change, worry not. Bethesda has yet to specifically name off any of the perks to be featured in Fallout 4 but they have released a poster which provides some hints about what sort of skills we can expect to see in the upcoming game and from the looks of it, some of the classics will be returning with an all  new look along with some brand new skills that we have yet to see before. 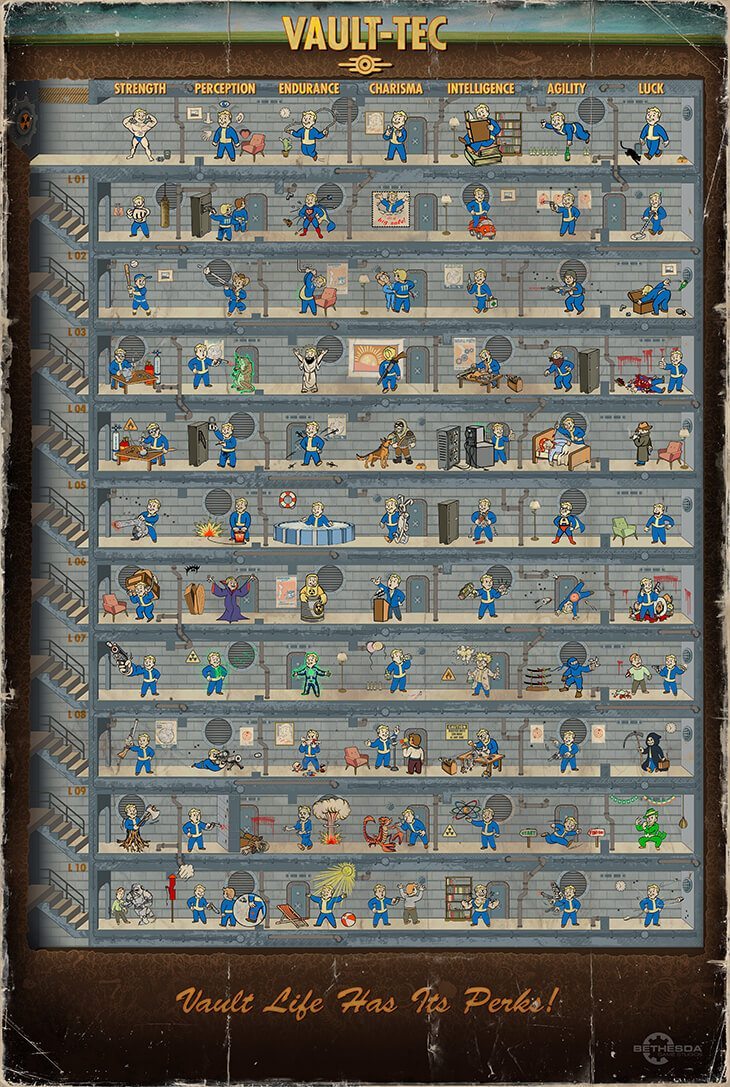 Bethesda developers commented on their development blog page addressing some of the changes to the leveling system that fans can expect to see in Fallout 4:

“ If you’re a longtime Fallout fan, you’ll notice that the Skills seen in previous games have been folded into this system. The previous Skill system had some confusing parts and ended up spreading your choices too thin. Some of you had questions like: “What’s better, the Charisma SPECIAL, or the Speech Skill? Why are assault rifles in Small Guns?” Additionally many Perks simply raised associated Skills. The Gun Nut Perk in Fallout 3 increased two separate Skills. In Fallout 4, the ranks of Gun Nut act as gates for modifying and crafting weapons. Sneak was a skill in Fallout 3, and you simply increased its value. In Fallout 4 Sneak becomes a Perk that not only makes you harder to detect, but wraps in previous perks like Silent Running and Light Step into its ranks. By wrapping these systems together, it keeps the emphasis on your SPECIALs and the level-up choices more rewarding.”

Undoubtedly this will be a bit of a changeup from what longstanding Fallout fans are familiar with from previous games but it does appear that these alterations will work to better streamline the system. Afterall, this new leveling system appears to be very similar to the systems that Bethesda was implementing during Skyrim.  It looks like we’ll just have to wait until Fallout: 4’s release in  November to see how everything shakes out. Until then.. “In Bethesda We Trust!”

Fallout 4: The Old Skill System Has Received an Overhaul