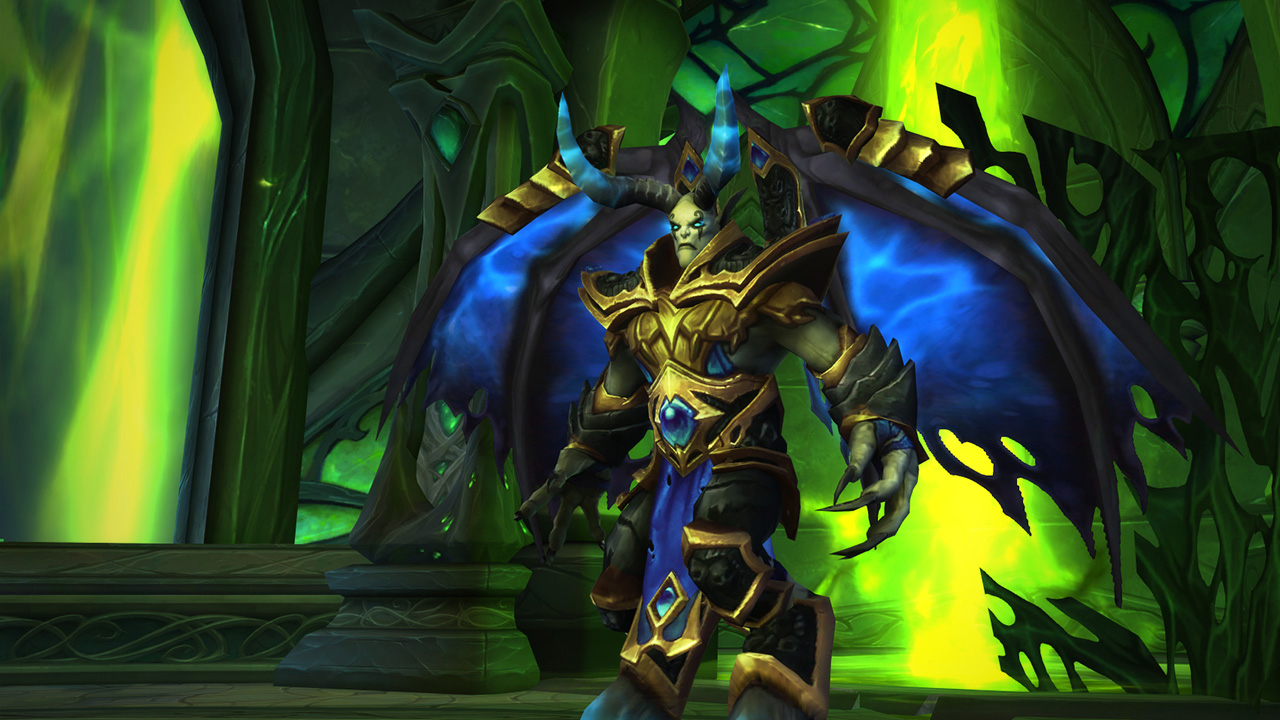 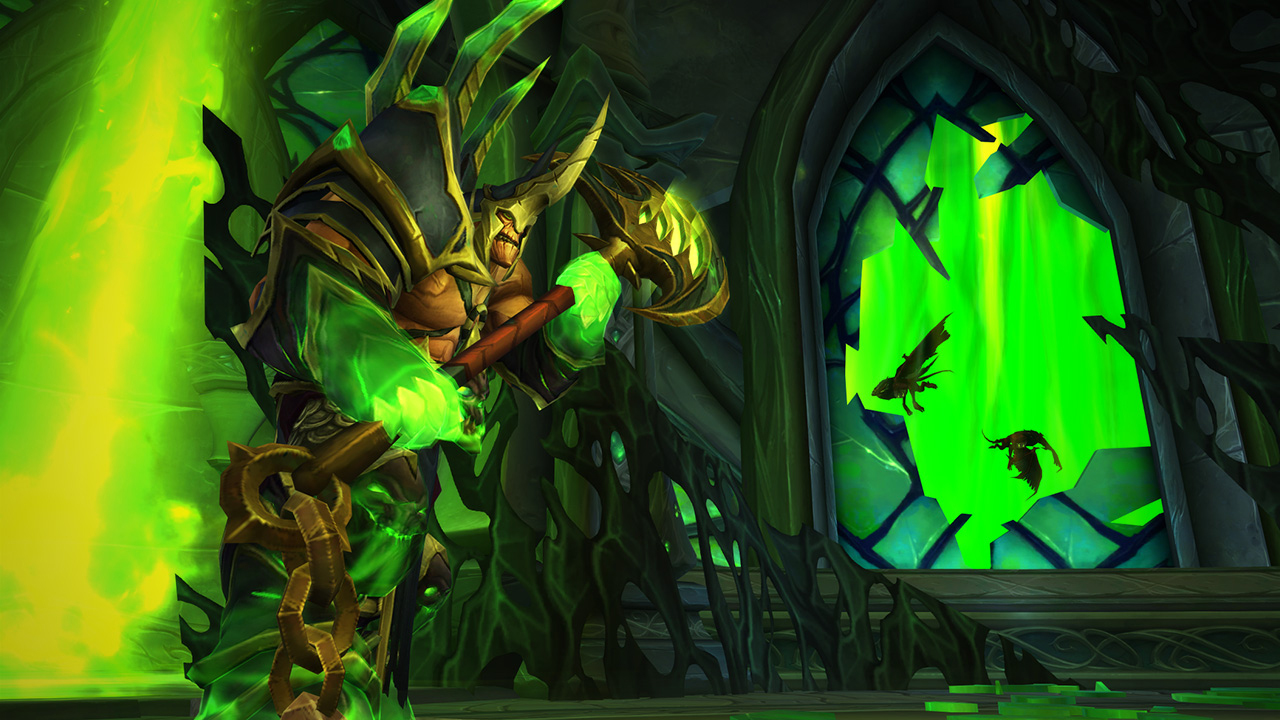 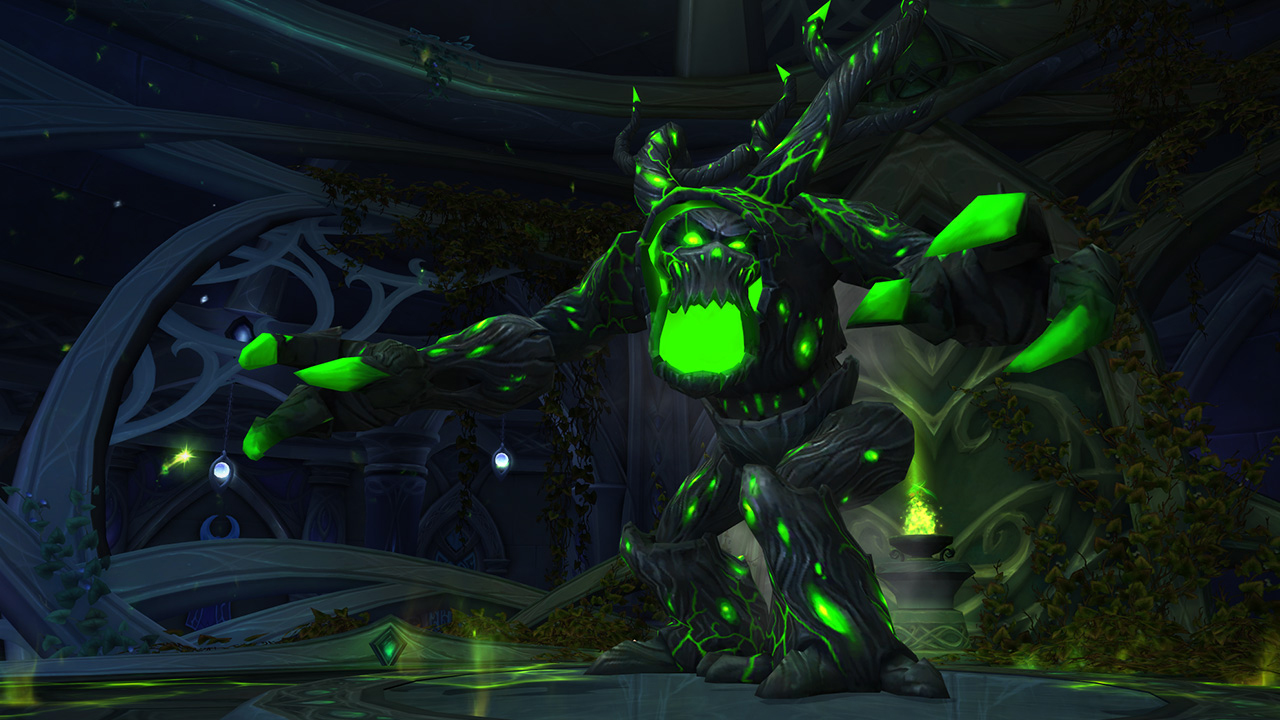 Blizzard has released a short preview of their new Dungeon, Cathedral of Eternal Night, a now corrupted temple of worship and protection against the evil within the Tomb. While the raid will delve deeper into the imprisonment of Sargeras and the construction of his tomb this Party dungeon takes a look into the fallout and a glimpse at the former majesty of the temple of Elune that was made to watch over it so that the events of Legion may never come to fruition.

The Hanging Gardens of the Temple have been corrupted by what was once their Caretaker, the Ancient Agronox. Deluded by the Fel corruption that has overtaken him he will fight you for your trespasses on his ‘perfect’ garden. With Dangerous Lashers assaulting your party, choking Vines to halt your progress, and Poison spores to punish your very presence within it you have to rid this foul blight from the once beautiful Terrace.

This Dimwitted Mo’arg has been dispatched to make sure you cant delve into the secrets of the temples libraries, a task he will take to with vengeance for his brother Smashspite who you’ve slain already. Fitting of the Dull brute he will take just as much pleasure from smashing up the enchanted tomes within as he does you for being there. Use his unkempt rage to throw him off balance and take advantage of your surroundings to defeat him, he cant go about unchecked disturbing unknown enchantments within this ancient library without a bit of comeuppance his own.

Save the Aegis of Aggramar

Your efforts in the Broken shore have kept the Aegis back safely in its place within the temple as a start to ending the Legion’s invasion, they aren’t going to stand for that. Domatrax is leading a legion force to destroy it, and he will summon his legions to do so, or to crush you if you try and stop him. Domatrax will be a horde encounter summoning waves of Legion Demons to kill you as his health drops, the Aegis will aid you in defeating him, but how much of its power can you rely on.

The Mastermind behind it all

With his forces pushed back from his front on the Broken Shore the Dreadlord Mephistroth has taken up a place in the cathedral as his final stand. Using all of his Cunning and his foul influence he will see to it that you cant recover the Aegis. Mephistroth Assaults the party with his Fel Magics as he charges his ability to assault you from the Shadows, where you can do nothing to him but he can continue to murder you at his leisure. Illadins aid is the only thing that can drive him from the Shadows again where you can defeat him, if you can manage.