In Star Wars Battlefronts most recent upcoming content release, we are briefly introduced to the new arena-based team battle known as “Blast Mode.”  In a recent post on EA’s  official Battlefront page, they state that the new mode is an answer to fans who have been calling for a team death match option in the new game and it’s sure to please.

A team of up to 10 Stormtroopers will battle against a team of Rebel soldiers of the same size in an all-out Empire vs Rebel skirmish. The goal is pretty simple, the team to first reach 100 kills wins or whichever team has the greatest amount of kills at the end of a ten minute period wins. Similar to the other modes that will also be available on Star Wars Battlefront, gamers will have the option to select three cards at the beginning of the match which will enable a list of special abilities and weapons to that player. In addition, several perks will be randomly placed throughout the map including place able turrets and droids that can reveal enemy locations. Blast Mode will not contain and heroes or vehicles as in other playable modes on the game.

The maps that gamers can expect to see of Blast Mode have been specifically catered so that the pace of the game play will remain high and the match intense. Blast Mode maps have been sized down from their original size which will force each team into closer quarters so that continued confrontation is inevitable. While the objective of the mode is relatively straight forward the new feature is expected to add a little variety to the game. Lead level designer Dennis Brannvall describes some of the map layouts that gamers can expect to experience in Blast.

“One battle you’ll be fighting within interior levels on Endor or Sullust,” Brannvall writes. “In the next battle, you might find yourselves among Tatooine’s dusty canyons, or inside the undeniably cool Ice Caves on Hoth. My favorite is the verticality of Tatooine, fighting by the Sandcrawler.”

A new image released on the latest post gives games a quick snapshot of the action to come on Star Wars Battlefront Blast Mode! 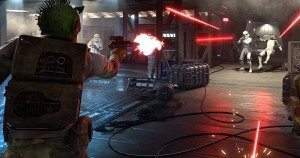